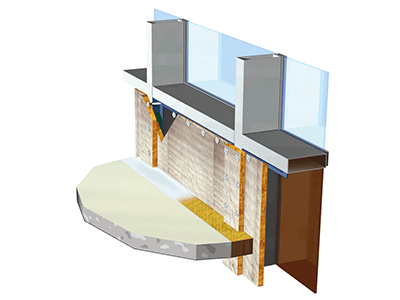 CURTAIN WALL AND EDGE OF SLAB - A curtain wall building is a multistory structure having exterior walls that are not part of the load bearing structure. Because floor slabs are supported by interior beams and columns, there is a perimeter void or gap typically ranging from one to eight inches between each floor slab and the exterior curtain wall. Perimeter voids are generally hidden from view after construction, and once installed, these construction gaps are never inspected or reevaluated unless renovations are made. They must be sealed to prevent spread of flames, smoke and toxic gases in the event of a fire.Traditional, water-based sealant – is a versatile spray for curtain wall or edge-of-slab applications where exposure to water and the elements is not anticipated during the lifecycle of the building. As spray sealants has high-performance movement capabilities that meet leading industry test standards and can easily be painted. Perimeter fire barrier systems are tested according to ASTM E2307, "Standard Test Method for Determining Fire Resistance of Perimeter Fire Barriers Using Intermediate-Scale, Multi-Story Test Apparatus